As hinted by the tongue-twisting title, Martha Marcy May Marlene (Dir. Sean Durkin, 2011) is primarily concerned with one woman’s struggle with a splintered sense of self in the immediate aftermath of her escape from a cult. Once Martha (Elizabeth Olsen) extricates herself from the farmhouse in which John Hawkes’ Charles Manson-like Patrick has built a ‘family’ around his Buddhist-derived teachings, she finds reacclimatising herself to ‘normal’ life problematic. Unlike most films that depict cults, Martha Marcy May Marlene is concerned with accurately depicting the experience of someone who is first drawn to such an out of the ordinary lifestyle and then ultimately struggles to free themselves, physically, psychologically and emotionally. In the process, writer-director Durkin humanises, if not normalises, the public perception of cult members most infamously personified by the Manson Family.

The film is a psychological thriller in the purest sense of the term, because the film projects for the viewer an exploded sense of Martha’s psychology in her first days outside of the cult. What has happened in her life before is clearly important – several references are made to her family life before the cult – though expository details are never made forthcoming and how her life will be in the future is left entirely open-ended. In a fashion similar to that employed in We Need To Talk About Kevin (Lynne Ramsay, 2011), the sound design of the film draws us into the protagonist’s frame of mind, as aural triggers plunge her back into her memories. In Ramsay’s film, the technique communicated how the memory of certain past events affects the experience of the present, while memories can themselves become charged and tainted with the full knowledge of what those remembered events portend. Both films give a sense of a character trapped by the past and in the midst of a battle to transcend it. 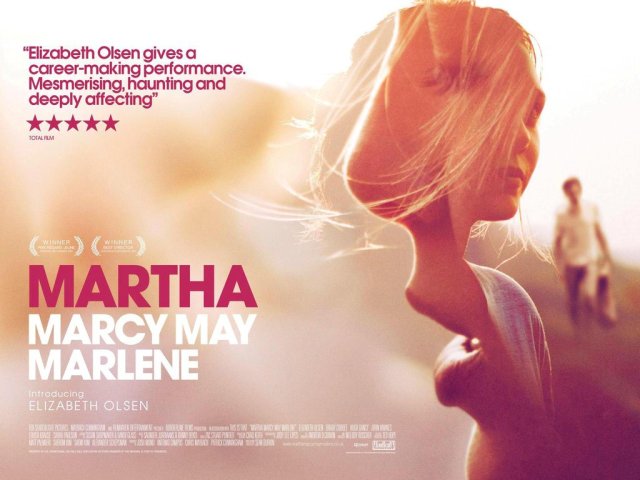 However, Martha Marcy May Marlene’s use of flashbacks is more than a storytelling device, although of course they function that way for the viewer. More fundamentally, they relate Martha’s psychological state. Her difficulty in discerning what is real and what is remembered – and what she is truly experiencing in the present time – demonstrates her destabilised identity. For the duration of the film, from one moment to the next, Martha’s perspective literally fluxes between place and time and psychological states. We necessarily share Martha’s confusion with temporality – the linear nature in which we normally experience life – as the film jumps back and forth from Martha’s time at the farmhouse to her sister’s lake house, while scenes at either location almost seamlessly overlap. As Durkin has explained, “For her it’s all happening at the same time so it is all in the present.”1 With only a handful of scenes between Lucy (Martha’s sister, played by Sarah Paulson) and her husband providing a sense of objectivity, the viewer shares Martha’s skewed perspective of time and space.

There are also subtler echoes of Patrick’s twisted take on Buddhist philosophy. In her time with the cult, Martha was indoctrinated with the belief that ‘Being in the moment is the most important thing, [to] forget about time, forget about any desires or goals.’2 Once she has left to reunite with her sister, Martha continues to struggle to disassociate that which she has believed and invested in – essentially how she had chosen to life her life – from the more problematic aspects of her cult experience. Specifically, the violent events that appear to trigger her escape have not completely undermined the worldview that she had adopted.

While the film is ambiguous in its depiction of the paranoia that afflicts Martha – her terror at the various sightings of an ominous van that she clearly relates to the cult and strange men who seem to follow and watch her – Durkin has spoken of the inspiration for his film’s narrative angle being the true story of one cult escapee. That ‘Martha’ was tracked down by the leader of the group (In Martha Marcy May Marlene, it’s Watts (Brady Corbet) who fulfils this role) who, rather than threatening her, gave her money and wished her well. The director describes it as “A complicated, twisted way of letting someone go,”3 inferring that the cult’s threat to Martha is not immediate and/or physical, but more insidiously psychological.

The abrupt ending has caused some to suggest – as they have done over the famously ambiguous endings to Inception (Christopher Nolan, 2010) and TV’s The Sopranos – that a clear, although of course debatable, meaning can be drawn. After a final, strange appearance from a young man driving a people carrier (which seems even to unsettle Martha’s sister and her husband), the film cuts to black on Martha’s anxious expression. The implication some have drawn is that constant paranoia will be Martha’s lot for the rest of her life.

Instead, it could be argued, in keeping with the concept that the film represents an exploded or expanded psychological state that, in fact, the film is genuinely open-ended and simply intends to depict Martha’s state of mind in a particular time frame. Whether she recovers completely, or is permanently damaged is left for the viewer to decide. When asked about the possibility that a more mainstream treatment of the subject matter would have given Martha a full recovery and eventual happy reintegration into society, Durkin responded, “That’s impossible in that time frame. That takes years.”4 Therefore, it’s clear the filmmakers’ focus was on a particular state of mind in a finite period of time.

Just as the cinema of David Lynch (particularly Mulholland Drive (2001) and Inland Empire (2006)) frequently takes on the quality of dreams – wherein the viewer ideally undergoes a process akin to lucid dreaming, immersed and sharing (as in the fanciful schema of Inception) a psychological space with the director and the protagonist – Durkin’s film blurs the line between the real and the imagined. Martha’s paranoia manifests itself in the way she projects perceived threats onto the real world and the viewer is invited to share this experience with her.

Sean Welsh, February 2012
This article was originally commissioned as a programme note by GFT.