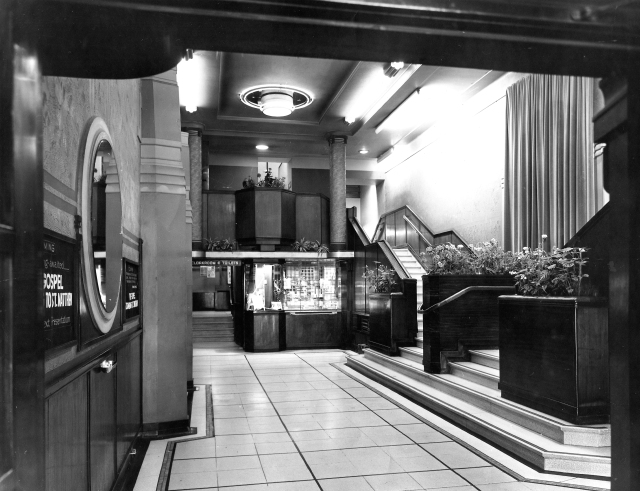 GFT’s shiny foyer, 1974. Pretty sure that’s a Pasolini listing on the left.

David Bruce, former chair of GFT, once director of the Scottish Film Council and Edinburgh International Film Festival and author of Scotland – The Movie, gave up his time to speak to me recently on the subject of the 1974 opening of Glasgow Film Theatre. In the early 1970s, Bruce was deputy director of the SFC, and part of the team that would set up the film theatres in Edinburgh, Dundee and Glasgow. The interview, commissioned by GFT, is timed to coincide with GFT’s 40th anniversary this year (also GFT predecessor the Cosmo’s 75th and Glasgow Film Festival’s 10th). You can read the final piece on their Cinema City site, here.

We spoke for a while, and since the topic was strictly-speaking the opening of GFT and the word count was pretty limited, there’s a lot that didn’t make the cut. For example, I was curious to hear how, at first, they did their best to introduce every screening at GFT. Bruce explained, “Every feature film, there would be somebody up in the sound box who would actually do a good evening and welcome and maybe say something over the PA about the film. We found that quite difficult to sustain, because it meant some poor sucker had to keep on doing it and some of us wanted to get home to our wives and children… We were always keen that there should be a life presence, a human presence in the cinema, as a way of making it different from the run of the mill.”

It was also interesting to hear how, before GFT became independent, the Scottish Film Council’s finances were tied to its ticket sales. “In some ways,” Bruce recalled, “it was a scary, maybe almost ridiculous, thing that the national agency’s capacity to support the culture was going to be depending on the box office from last week.” Nevertheless, he maintained the programming was not affected by this pressure. “I can honestly, hand on heart, say we never had any cause to compromise. We certainly didn’t increase the popular stuff to keep the budget. Rather, we stuck by our original ideas of how to do it and it panned out OK.”

Read more, including why GFT’s screens lasted longer than in your average 1970s cinema, and how GFT stayed the working man’s education while becoming the single woman’s cinema, all at Glasgow Film’s Cinema City site.