This week, Matt Damon runs about wearing Meccano over his jammies, Patrick Bateman’s secret origin is revealed and Batman…because sometimes it’s just more effort not to talk about Batman. Sadly, pathetically, it was the weekend before I got anywhere near a movie this week…

Elysium (Neil Blompkamp, 2013), Cineworld, 11:00
This was really kind of a crushing disappointment when you take into account Neill Blomkamp’s excellent debut District 9 (2009), and Elysium‘s promising trailer. Like Prometheus (Ridley Scott, 2012) and Oblivion (Joseph Kosinski, 2013) before it, the set-up is great, but it quickly takes a turn towards lazily-scripted nonsense. Jodie Foster is inexplicably dubbed throughout and although it’s her own voice, it’s strange and completely distracting. Digging around, it seems the double-Oscar-winning actress originally chose to perform with a French accent (she’s fluent and, ironically, dubs her own films for French release), but someone, somewhere decided to veto that choice…after the fact. Elsewhere, there’s a bunch of dialogue conspicuously delivered over cutaways, which generally suggests late-in-the day, post-production story fixes. That probably wouldn’t be as noticeable without the Fauxdie Foster scenes as a cue, but the script itself eventually stretches incredulity, undermining everything else and the whole thing unravels into just-because plotting and hackneyed “hero’s journey” tropes.

It’s a cliché in itself, but it’s still bizarre and a shame that all these amazing-looking, mega-budgeted studio sci-fi films can’t even get their scripts straight before they start shooting. Pacific Rim was phenomenal but it only gets a pass on some pretty horrendous dialogue and plotting because it was so beautifully crafted (though some of the truly horrific accents could have used some dubbing). So what went wrong with Elysium? Studio interference? I don’t know if there’s any suggestion of that – the lead role was originally earmarked for Die Antwoord’s Ninja (he turned it down) and Damon was actually Blomkamp’s third choice after, um, Eminem (he would’ve done it if they filmed in Detroit). Apparently the film was sold on the strength of Blomkamp’s designs rather than the script, so it would seem he had a pretty free hand otherwise. A lot of people like Prometheus and a lot of people like Elysium, but both of those films could have been so much better, in frustratingly obvious and easy to fix ways. I doubt Blomkamp’s reputation – built on his VFX work as much as District 9 – will be dented by Elysium, but it’s hardly a stellar second act.

Empire of the Psycho, Old Hairdressers, 13:00
This was the first in six weeks of Saturday Salon Matinee events programmed by The Old Hairdressers and The Fantom Salon (personified on the day by Rob Churm and Marc Baines). I’ve seen a few film events in the Hairdressers, including Strange Vice’s expertly-curated b-movie marathons, and we even did one ourselves with Matchbox Cineclub (the Jay Reatard doc, Better Than Something). It’s a good space, kind of tucked away upstairs, and if you can cope without Cineworld bucket seats you’ve a great chance of seeing something cool. Baines negotiated the Hairdressers’ squeaky floor upstairs to introduce the most “film-heavy” of the planned matinees, a double-bill of Empire of the Sun (Steven Spielberg, 1987) and American Psycho (Mary Harron, 2000) which, Churm elaborated, we should think of as one megafilm, “where Christian Bale is the same character and we learn why he’s a psycho in the first film.” A short film by Anna Kraay based on Empire of the Sun writer JJ Ballard’s The Concentration City (and “slightly inspired by La Jetee”) preceded the double-bill.

I’d seen American Psycho a fair few times, but never Empire of the Sun, so I was in it for that at least. Watching it for the first time in this context was interesting. It’s a stretch, obviously, to fit the two films together narratively or even chronologically, but the programming was clearly more playful than pretentious. Primed to search for them, you find there are aspects of Bale’s performance in Empire of the Sun that rhyme nicely with American Psycho – particularly when his character, face caked in mud and surrounded by clippings from US magazines, adapts an American persona. I’d like to have seen Patrick Bateman reframed in the context established by Bale’s earlier performance, but it wasn’t to be. A late start and a thinning crowd (those wooden pews are kind of punishing) meant they elected to drop American Psycho in the end, but I reckon the concept was sketched successfully enough. Churm proposed the experiment could be extended even further by appending Nolan’s Batman trilogy, which personally I think is an excellent and sensible way to spend 12 hours.

From the awesome poster (see above, credit to Baines) onwards, this is a great idea and the next five weeks look even more interesting. Upcoming, they’ve got Little Murders (Alan Arkin, 1971) backed with a Kurt Vonnegut Arena interview and a live performance from Ela Orleans in collaboration with Natalie McGowan, then the Glasgow premiere of Duncan Campbell’s It For Others (2013) alongside pieces from Anne Marie Copestake and Kimberley O’Neill, then a rare screening of Trans-Europ-Express (Alain Robbe-Grillet, 1966) with a complementary Kraftwerk on ukulele performance from Gus. If you can, you should go – especially because it’s free. Here’s the trailer for Little Murders to whet your appetite:

Daredevil (Mark Steven Johnson, 2003), DVD
Alas, instead of taking Rob Churm’s advice, I spent the next couple of hours (it did feel like 12) with the new Batman, Ben Affleck, in his first outing as a costumed vigilante. This week, Affleck got cast in Zach Snyder’s as-yet-untitled Man of Steel sequel, to mixed reaction. Seems like, Oscars or no Oscars, a lot of people can’t get past Gigli (meanwhile no-one even remembers Al Pacino was in that movie, probably because he was pretending to be Jon Lovitz). Plenty’s been said about it already – petitions have been started, jpegs have been doctored – and the call for common sense to prevail has been sounded, most sensibly indeed, by Matt Singer over at The Dissolve. Past experience suggests everyone should have a coke and a smile and shut the fuck up till the movie’s actually made.

But where’s the fun in that? It’s been pointed out that plenty people hated Heath Ledger for the Joker when his casting was first announced and, even more to the point, folks hated Michael Keaton for Batman at first. Bleeding Cool provided a salient look at some press cuttings from 1988, when random Batfan Beau Smith asserted, “Batman should be 6-2, 235 pounds, your classically handsome guy with an imposing, scary image.” Affleck is 6′ 2.5″ (thank you, celebheights.com), estimated at 205 pounds (but he’s already bulking up for Bats). So Beau, wherever he is now, should be delighted. The interesting thing to me is since 1989 (and arguably since 1978, when we first believed a man could fly), the audience (read: fandom) has evolved to the point where a Batman exactly to the necessary visually specifications is still cause for concern. Or maybe it really is just the Gigli thing.

Either way, Snyder’s past form suggests two things: a preoccupation with the visual, preferably of the spectacular variety, on one hand and casual, brutal, inconsequential violence on the other. The former made Man of Steel seem a promising antidote to Bryan Singer’s good-at-lifting-things Supes, while the latter later proved to undermine, for me, the film he ultimately made. The same qualities made his Watchmen simultaneously the most slavish comic book adaptation ever made (visually) and one of the most tonally off-base (Nite Owl and Silk Spectre as lethal, quasi super-powered brawlers?!) I remain sceptical that the ‘world’s greatest detective’ aspect of Batman – the aspect that usually gives him the edge over Superman – will be properly served. However, the Superman we saw in Man of Steel oversaw mass devastation on a par with several 9/11s and ultimately executed his enemy. I’m sure it makes sense for Bats, if not Lex Luthor, to have something credible to say about that in the sequel, should Snyder want to address it. Regardless, Affleck will be the eighth person to portray Batman onscreen; Daniel Craig made eight for James Bond too (if you include two ‘unofficial’ outings). Unless they totally fuck it up (in the industry, it’s called “Schumachering”), the next-but-one Batman already walks among us and the spoiled geek youth of today really don’t know how good they’ve got it.

Oh, yeah, and I watched Daredevil on DVD – not the director’s cut, mind – and Affleck is really not what’s wrong with that movie. As long as Snyder’s Bruce Wayne doesn’t take a flirty tap class with Talia, we may be OK after all.

The X-Files: Fight The Future (Rob Bowman, 1998), DVD
I started Sunday at Braehead for Collectormania, hoping to catch a glimpse of Lance Henriksen in person, if not shell out £20 for his signature (in the end, I missed him entirely). I did meet the creator of The Crow, James O’Barr (who talked about liking Gemma Arterton for Shelly in the upcoming reboot – you’re welcome, scoop fans!) and Batman, so the day wasn’t a complete wash-out. Deeply regret not having deep enough pockets to raid the Strange Vice stall – I would have cleaned them out if I could – which was packed with awesome stuff. In particular, they stock Mondo Candido (Gualtiero Jacopetti, Franco Prosperi, 1975), which I am determined to pick up from their online store next time I can afford it. On the day, I could only stretch to a cheap, clearly bootlegged copy of Roger Corman’s Fantastic Four on DVD (not from Strange Vice, I hasten to add). Unfortunately, I’d spent my pocket money earlier in the week, because HMV and Fopp seem to have a bunch of stock they need to get rid of right now and they’re doing a 4 for £10 sale. Something to do with their going through administration earlier in the year, but some of the stuff on offer was ridiculous – one staff member, piling up stock, told me they’d even stickered-up a complete X-Files boxset earlier in the day. Weeping uncontrollably on the inside, I made do with a double-pack of the X-Files movies instead (together with Trash Humpers, a Quay Brothers collection and Samsara/Baraka on Blu-ray, so, swings and roundabouts).

In a couple of weeks it’s the 20th anniversary of the transmission of the first episode of The X-Files, so it seemed like a good time to revisist it.  The film is pretty much how I remembered it – like an extended episode of the TV show and not a whole lot to justify the big-screen treatment. Some nice moments  – Mulder spilling his guts to a barmaid, then taking an alleyway piss onto an Independence Day poster; “When I panic, I make this face” – but the ratio of too-long establishing shots (filler!) to concrete answers is frustrating. The best thing about it was it made me want to watch the whole thing from scratch, so I curse the person who picked it up the boxset for only £2.50, I really do. I hope they open it and find 55 discs of Gigli.

But, anyway, you can’t ruin the day you met Batman. 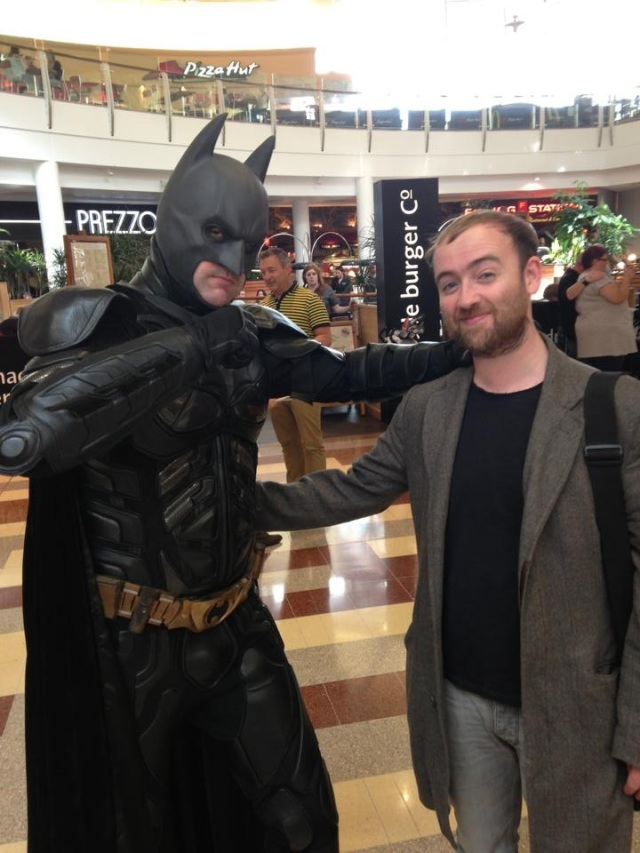 L-R: Batman, the author. NB for all I know, the man in the costume is a registered sex offender.